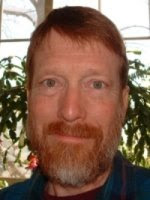 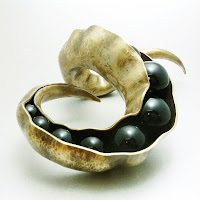 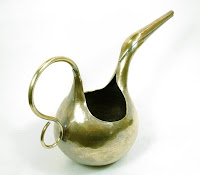 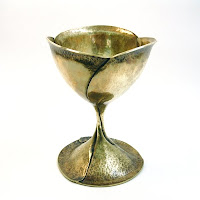 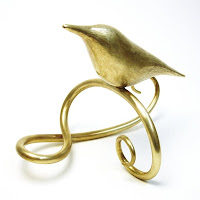 I found Steve Shelby on Ganoksin Gallery and asked him to participate even though he's not a jewelry designer but rather a metalsmith working on a larger scale to create lovely, gentle and flowing objects from brass. Here's what Steve had to say:

Your work has a graceful quality; tell us about what you try to achieve with your pieces?

I like curvy things, especially growing plants, like vines that you can practically see growing. I have grown gardens and observed and studied these things since I was a small child. My sense of aesthetics is based on these forms found in nature; they are ingrained in my subconscious mind. What I am trying to achieve is to translate my sense of beauty into forms in metal.


How would you describe your style?


I think my style most closely resembles Art Nouveau, which, from the time I was first aware of it, I have considered to be the most aesthetically pleasing style. I'm not trying to imitate Art Nouveau, but since my inspiration is the same as that of the artists of that style, the results are similar. My style in some ways could also be called impressionist, since rather than putting a highly refined, perfectly smooth surface on my pieces, I leave them showing the hammer marks that created them. I also strive for simplicity and elegance. I admire the way that Constantin Brancusi was able to take a subject and simplify it to an extreme. I don't go nearly that far, but I try to avoid getting involved with a lot of detail, the only adornment being the texture created by the hammer.


Why do you focus on brass? What do you find special about this metal?


The reasons are many. It started with my teacher in college who said that brass was more appealing than copper. Then when I worked for Fox Products Corp., making parts for contrabassoons, I worked with brass constantly, getting to know the material intimately. That brass was finished off perfectly smooth and silver plated. I like the looks of brass that is aged and takes on a mellow brownish-ochre tone. Then there's the durability factor. I never thought I was making a statement with my art, but I just realized I am in a way: I really hate the way everything we buy today is meant to be used briefly and then thrown away. It bothers me that possibly in future ages, our era's greatest monuments will be our landfills. Anyway, I want to counter that by making things that last, and brass is strong and durable enough to last a long, long time. The fact that I use brass also makes me somewhat unique, and I have never been one to follow the crowd. I started doing what I do now only about six years ago, and prior to that I was largely uninspired. At the risk of sounding crazy, I was hit with a vision one morning upon getting out of bed. It was something made of brass, like a vase. I took it as a message that it was time to get started on a new course. I ordered a sheet of brass and made the vase in the picture. I have had more inspiration than time ever since.


How do you think the work primarily differs from work done by jewelry metalsmiths?


Mostly in scale. I made jewelry when I was a student, and got so I wanted to make bigger things. I did make some rather large pieces of jewelry, and I've seen some really outlandishly large art jewelry, but I really doubt if anyone wears it. I decided that I would rather make larger pieces and forget about jewelry. Since what I make is larger than jewelry, generally the tools are also larger, and I need a slightly larger area in which to work. I have narrowed myself to pretty much just hammer-forming. I don't do any casting or stone-setting, although I'm taking a departure on a piece I'm working on now, which has a large cabochon as its focal point.


How did you come to make a career out of metalsmith work?


It took a long time to get to that point. After many years of doing other things, I came to the realization that it's what I enjoy the most, and what I feel I was meant to do. I'm not a particularly religious man, but I feel that somehow I've been guided into this by an outside force, and I'm just going along with it.

What advice do you have for fellow metalsmiths on surviving this economy?


Hope...pray...I wish I knew. I try not to dwell on it too much, it's too depressing. My hope is that the people who buy art will not be the people who lose their jobs, and so we'll continue to sell our art. It's hard to talk about it without sounding selfish. I feel for anyone facing hardship because of the economy, and I hope and pray I don't have to become one myself.

I love Steve's work and love his quote about having more inspiration than time. What a great way to wake up each morning! You can see more of Steve's work at his own website: shelbyvision.com.

Thank you, Sally, and what wonderful irony: it's my birthday!
I wanted to point out a little glitch. In one of my quotes i mentioned the vase in the picture, but there's no picture of the vase. The vase I referred to is here: http://www.shelbyvision.com/images/MetalArt/vase2lg.jpg .
Happy Holidays,
Steve shelby